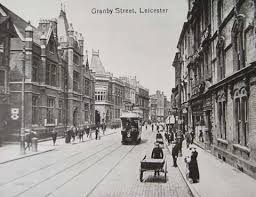 Leicester’s Granby Street Conservation Area stretches from Gallowtree Gate in the North West to London Road in the south east and includes some of the side roads. It was designated on 21st June 2006 following concern that some unlisted buildings were under threat of redevelopment.

Conservation Area status means there are stricter controls on changes that can be made to buildings and land including the need for planning permission to demolish a building or part of a building, strengthened controls over some minor forms of development and the automatic protection of all trees.

Granby Street has a long history but owes many of its fine and important buildings to the 19th century, reflecting Leicester’s industrial success and civic pride during that period. Many businesses including banks competed with each other to erect buildings that they felt would properly reflect their importance.

In this series we will take a brief look at some of these impressive buildings. (Our own offices at 56 Granby Street are slightly more modest and so will not be included in the series!)? 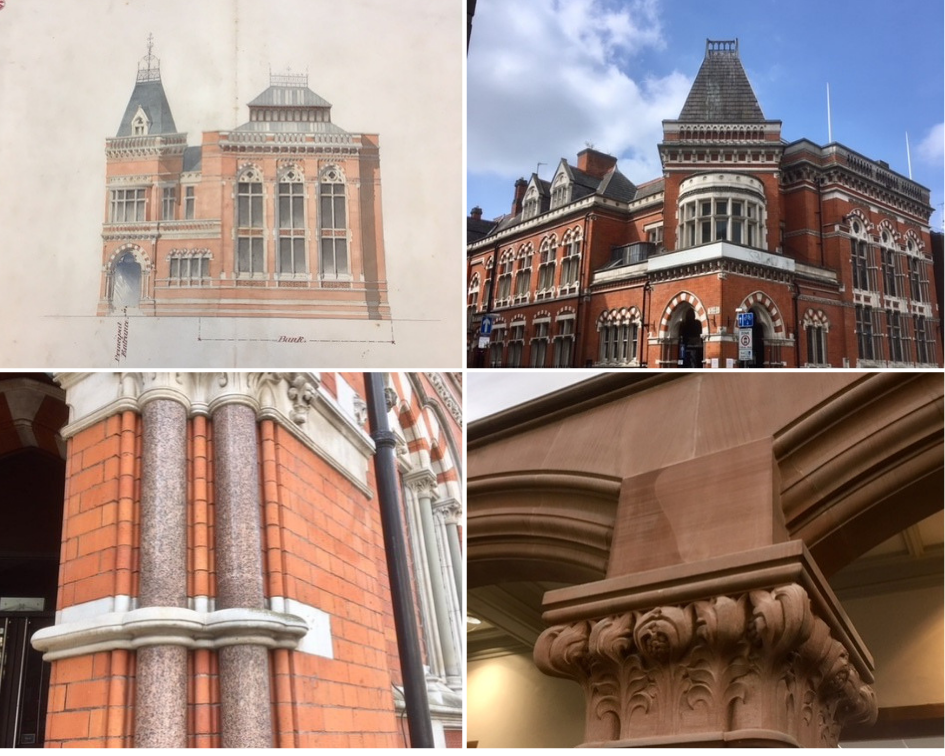 On the corner of Granby Street and Bishop Street is a building designed in 1869 by well known Leicester architectural practice Goddard  and Paget for the Leicestershire Banking Company. It subsequently became Midland Bank and then HSBC.

It is one of the most impressive buildings in the city centre, being a combination of Italianate and Gothic design and with what is known as a “French pavilion” roof over the main corner entrance. Built of red brick with carved limestone and moulded terracotta detailing and a Swithland slate roof covering. The banking hall ceiling is open to show the decorated timber roof structure.

This building which is Grade II listed now has a completely different use as ISKCON 9 the International Centre for Krishna Consciousness. 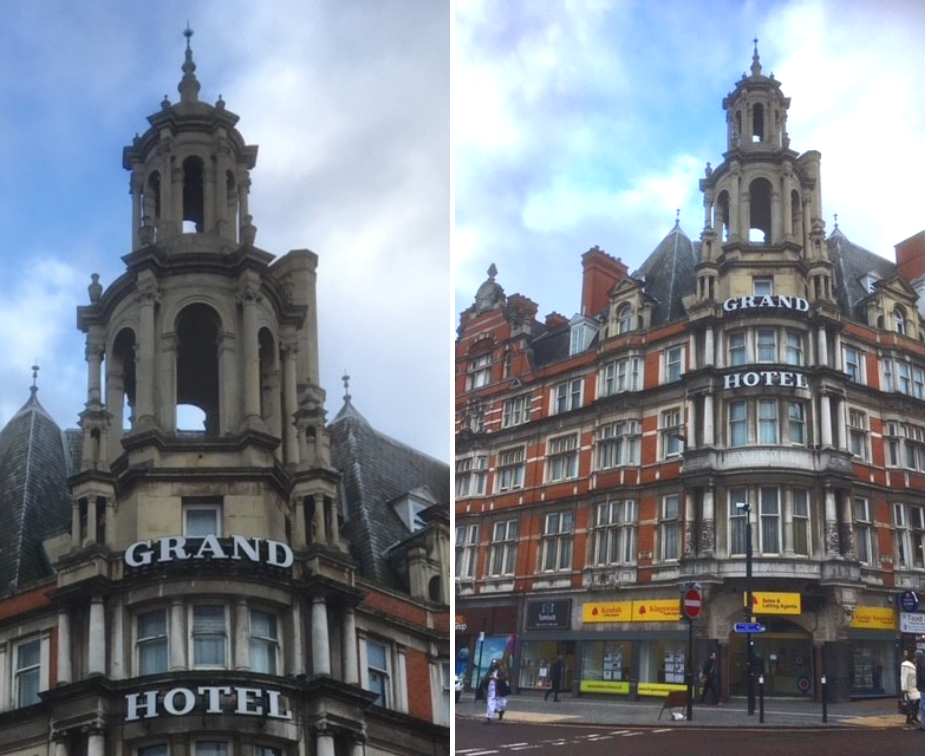 Located on the corner of Granby Street and Belvoir Street is Leicester’s Grand Hotel. To some it’s ornate architectural style is reminiscent of a “wedding cake”.

The first phase was built in 1896. It is a mix of Baroque and Flemish styles which were developed over several phases of construction. Typical orange red Leicester bricks contrast with white stonework.

The Portland stone corner tower was designed by architect Cecil Ogden and is meant to resemble some of the churches designed and built by Christopher Wren after the Great Fire of London.

The maintenance budget for this large, intricate building must be enormous! 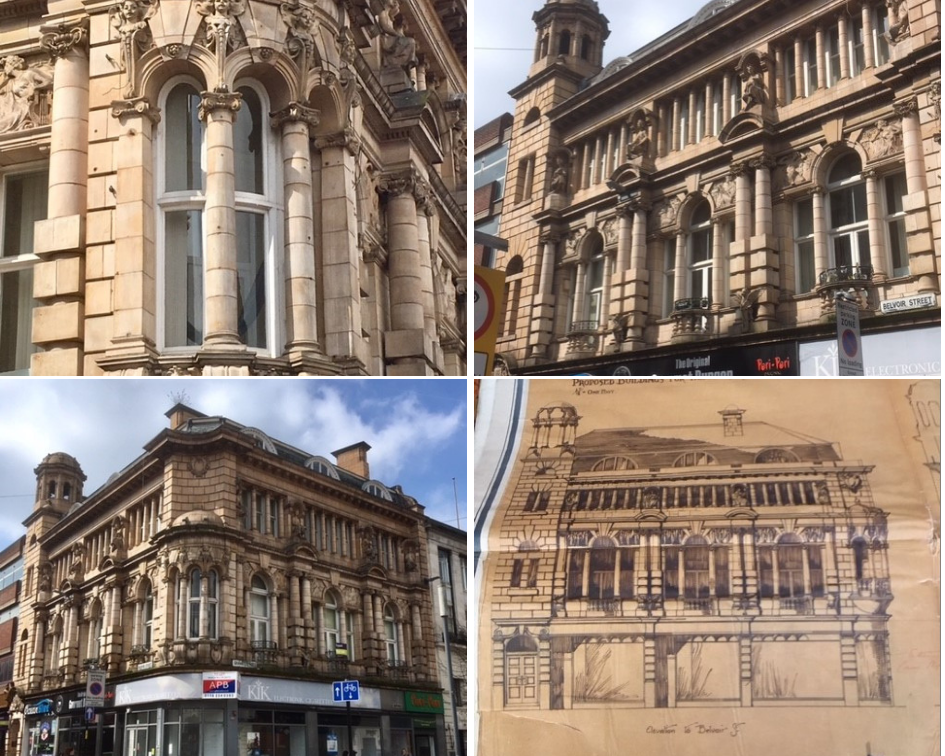 Located on the corner of Granby Street and Belvoir Street is an ornate building designed for the General Newsroom Company by Joseph Goddard and completed in about1898. It is now known as the “Newsroom Buildings” and is finished in Burmantofts terracotta, a manufacturer of ceramic building materials and named after the Burmantofts district of Leeds.

It is an elaborate baroque building with statues and windows recessed between pillars. Baroque architecture was begun in late 16th century Italy and often features gigantic proportions, twisting columns, theatre like effects and clusters of angels and other features. 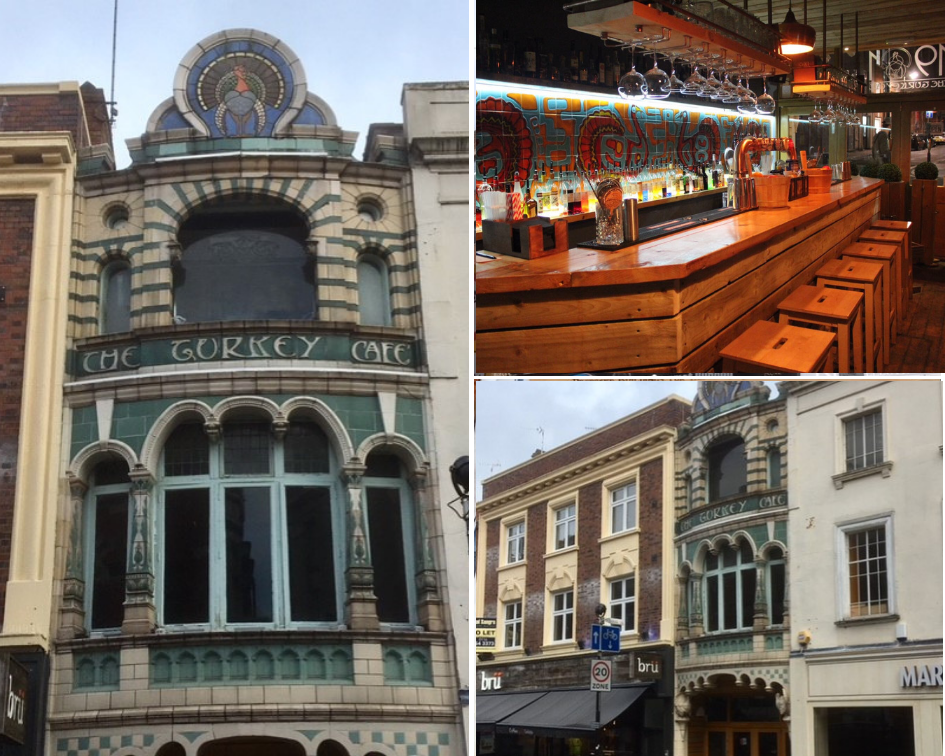 The “Turkey Café”, designed by Arthur Wakerley, is probably Leicester’s best example of coloured glazed terracotta and is clearly influenced by the Art Nouveau movement. It was opened in 1901.

The main panels, coloured green, blue and buff were made by Royal Doulton of London using a type of terracotta known as “Carraware” which is a matt glazed form of stoneware. Inside the café there is a tiled mural panel from the 1960s with another variation of the turkey theme.

The building was originally a fashionable café meeting place for women with a men’s smoke room at the rear. From the 1960s it was owned by the Brucciani family as a coffee and ice cream shop before being an Optician’s for two decades. In 2014 it once again became a bar/café and is now Grade 2 Listed.