The Renaissance of the Wood Burning Stove 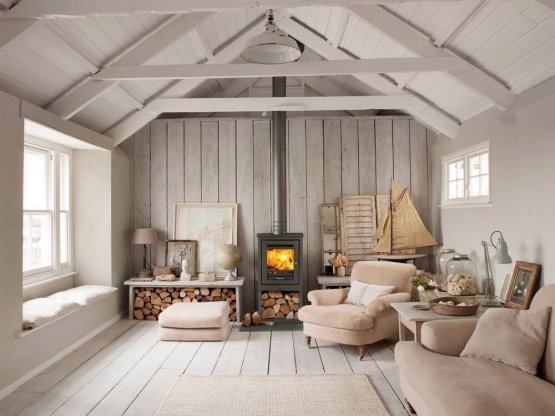 Many things connected with home interiors comeback into fashion over time, however who would have thought the humble cast iron wood burning stove would make such a comeback in the 21st century?!

The first cast iron stove was patented in Strasbourg in 1557, however this was a high end consumer item and it wasn’t until the industrial revolution towards the end of the 18th century that they became commonplace in the UK, gaining a reputation for heat efficiency. The advent of the modern gas fired central heating system of the late 1950/60’s saw the popularity of the wood burning stove decline rapidly with convenience, cost and cleanliness earmarking their decline.

Until that is recent years, when they are very much back in fashion! Iconic and contemporary designs in every imaginable colour can set you back anything from £500 to an eye watering £3,500 and with over 180,000 wood burning stoves fitted in the UK last year, 5 times higher than in 2007, what is the reason for this recent rise in popularity?

In my opinion, the high cost of energy is a definite factor. It is estimated that a wood burning stove can reduce your annual heating bills by 10-40% per annum, equating to about £90 - £400. A wood burner costs about 4p/kWh to run, about the same as gas system bit a lot less than electric systems at 15p/kWh. This cost is obviously reduced considerably if you can source your own wood for free. Wood burners are considered environmentally friendly as they are carbon neutral, and men especially like them as they make them feel like "hunter gatherers" of a bygone era (and most are fascinated by pyrotechnics and consider controlling a fire as a real skill!). The main reason I believe that they have become so popular, is that they now produce an architectural focal point in the room whether lit or not, indeed it is estimated by many Estate Agents that a wood burner can enhance the value of your home considerably more than the cost of installation.

A word of warning however - never underestimate the combustible power of these burners. Installation requires the help of a professional or you could run the risk of a chimney fire, which is not a fun experience! If your wood burning stove is not properly installed and maintained annually it could also invalidate your home insurance. Some friends of mine recently moved into a house that had a wood burning stove fitted 8 years ago. Having had to light their log burner unexpectedly due to their central heating system not working, they experienced a rather nasty chimney fire. An emergency 999 call later resulted in three fire crews being called out as well as the Chief Leicestershire Fire Officer! Thankfully, all turned out well but it highlighted that the stove was installed incorrectly and probably hadn’t been swept since it was originally installed! A Big lesson learnt!

So, what will be the next technical development of the humble wood stove? What we are now seeing is a new generation of high efficiency wood stoves that are low in emissions. This development has partly come about from new Environmental Protection Agency regulations and I’m sure will result in more and more people rediscovering wood as a smart, renewable source of supplementary heating for the future.  As a bonus, the new contemporary stoves also look great in your sitting room!